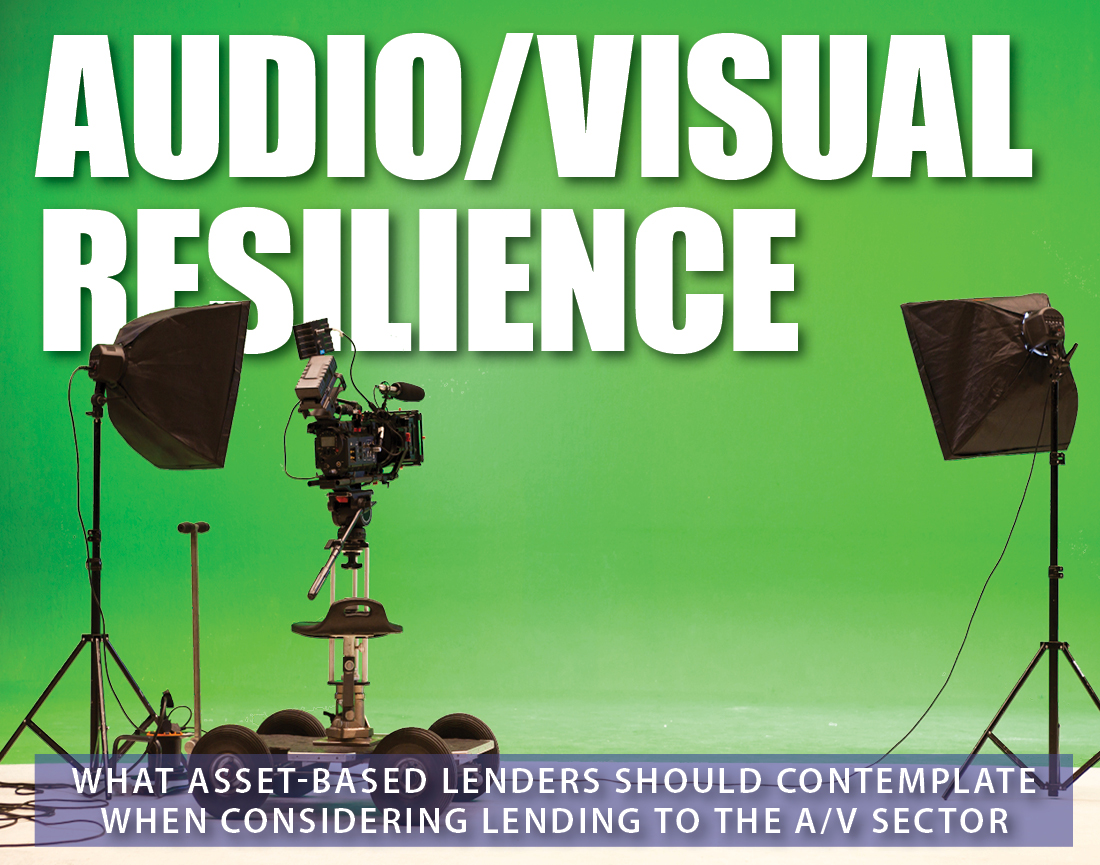 Tiger Group experts provide insights into the factors asset-based lenders should contemplate when considering lending into the professional A/V sector.

Asset values in the audio/visual (A/V) sector—everything from high-end digital cameras for movie, television and commercial productions, to specialized lighting for live events—continue to strengthen, due in part to the commencement of productions and the rebounding U.S. economy.

Questions related to COVID-19 remain. For example, it is unclear whether the rise of the delta variant will have a deleterious effect on indoor concerts this coming fall and winter. If that happens, demand for related production equipment could certainly be impacted. However, the signs are mostly positive. ABL lenders have good reason to be confident in the value of A/V collateral as well as the overall health of the sector. There are also grounds for optimism about the potential to pursue new A/V opportunities. For example, the “content boom” of TV and movie production—for both Hollywood studios as well as streaming services such as Netflix, AppleTV+ and Amazon Prime Video—continues to accelerate. Indeed, some of the leading equipment rental companies are as busy as they’ve ever been. Meanwhile, the live-event business is bouncing back as crowds return to sporting events, festivals and more.

The companies that produce these events, having survived the worst of the crisis, may now want to take advantage of the situation by raising capital to reinvest in their operations by acquiring cutting-edge equipment and/or rivals that were weakened by the pandemic. Indeed, some private equity firms and lenders are already exploring opportunities to meet this demand among potential borrowers. Prominent A/V companies are also commissioning appraisals to better understand their strategic options. Recent examples of the latter include Tiger clients representing North America’s largest lighting firms, and a leading A/V rental house.

Trends from 2020-21
The experience of Tiger Commercial & Industrial’s A/V practice over the past couple of years helps illustrate the resilience and evolving trajectory of the A/V business in North America.

When the pandemic hit early in 2020, production of films, TV shows and live events took an unprecedented nosedive. Relatively quickly, however, industry stakeholders regrouped and collaborated with public health experts and government officials to develop stringent safety guidelines. These union-backed moves enabled production to kick back into gear, especially with respect to TV and film.

By the end of 2020, Tiger’s total dollar volume from A/V auctions, private treaty and other sales had climbed 37.9 percent over 2019 levels, including a 21.2 percent increase in lots. Bidders came from across the United States and 21 countries. The sell-through rate was nearly 100 percent. These sales typically featured digital cameras, lenses, projectors, matte boxes, monitors, accessories and more, with brands such as Canon, Panasonic, Red Scarlet, Sony, Angénieux, Fujinon, Christie, Sanyo, Arri and Zeiss, to name a few.

A good portion of those sales were of excess equipment being liquidated by healthy A/V rental companies that needed to make room for new gear. Others, though, were rooted in the hard times that befell live-event production companies during the worst of the pandemic. Even some storied names were forced to close. In November 2020, for example, Tiger C&I ran a three-day online auction event for Toronto-based Westbury National Show Systems, the second largest live-event production company in Canada. The auction featured audio, lighting, video and staging equipment valued at more than $15 million. Westbury had been placed in receivership the month before.

Equipment dispositions from the live-event side of the business continued into 2021, and we saw more live-event companies shutter their operations. The sheer volume of sales—thousands of lots of production equipment with varying specifications, conditions, and levels of usage and maintenance—gives appraisal and disposition firms a high degree of confidence in A/V valuations.

Reflecting the enthusiasm for a resumption of sporting and other live events, demand for the specialized production equipment used in this segment—microphones, consoles, speakers and stage equipment—has been particularly strong this year. On the film and TV side, meanwhile, mainstays such as digital cameras and prime and zoom lenses continue to fetch high prices from buyers all over the world.

Moving Forward
During the past 24 months, Tiger has appraised more than $300 million at market value of high-quality A/V gear for major stakeholders in the industry. This has provided an enormous benefit for the rental companies and lenders.

In contemplating whether to loan into the professional A/V sector, it is important for asset-based lenders to consider whether the borrower conducts live events or serves clients in TV and film production.

If the former, then at least for now the question of whether those events are held indoors or outdoors may be relevant: An operator focused on seasonal outdoor events may still perform better than one with an exclusively indoor offering until concerns about the virus truly have faded.

But with respect to TV and film production, all signs point to robust and even accelerating growth. This is visible on multiple fronts, including the activity in hotspots like Georgia, nicknamed “Y’allywood” for its booming production business. This past July, the Georgia Department of Economic Development reported that Georgia had seen a record $4 billion in direct spending on TV and movie production in the fiscal year that ended June 30. It was a remarkable rebound given that Georgia had seen that figure decline from $2.9 billion in fiscal 2019 to $2.2 billion in fiscal 2020, which included some of the worst months of the pandemic.

And, as in just about every business sector, the scale of the business is a critically important factor. Consolidation continues among TV/film and live-event production companies alike, creating significant competition for smaller firms. Simply put, it is far harder today to make it as a “startup” on either end of the business. Any analysis of borrower health should take such competitive dynamics into account.

With respect to rental houses, the appraisal should also include an in-depth assessment of the technical specifications of the equipment on hand. Especially on the camera side, manufacturers are continually offering next-gen equipment with new and more powerful features; digital LED lighting, too, is a fast-changing area. Should all the equipment be cutting edge? Not necessarily, but rental houses that fall behind on the obsolescence curve will eventually find themselves at a disadvantage.

Despite such caveats, it is nonetheless true that the A/V sector has a strong track record and is full of bright spots. As today’s A/V companies strive to gain market share, ABL lenders stand to benefit by joining them as strategic partners.