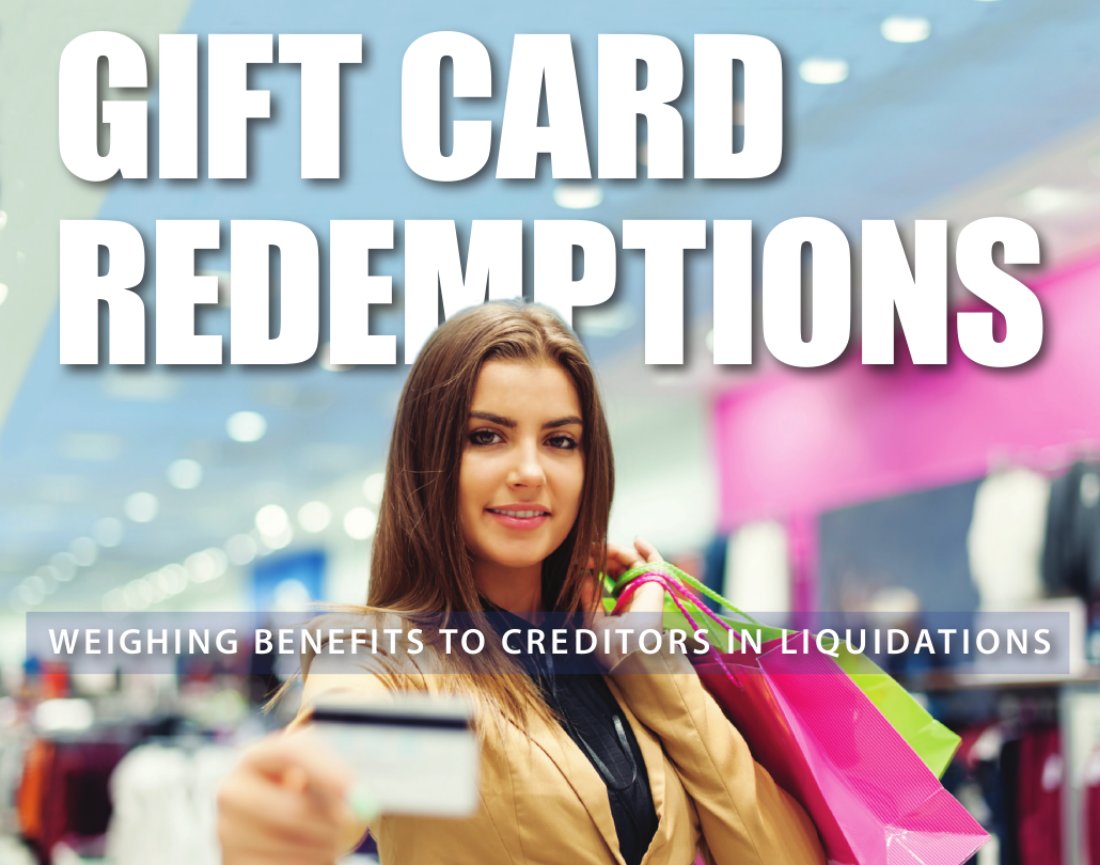 U.S. consumers love gift cards. According to research firm CEB Tower Group, Americans loaded approximately $124 billion onto gift cards in 2014 alone. However, it is easy to see why, in the ABL world, the estate tends to regard gift cards as nothing to celebrate. After all, from the unsecured creditors’ perspective, accepting gift cards during the course of a liquidation sale is tantamount to lighting cash on fire.

Asset-based lenders typically structure reserves on the borrowing base to account for outstanding gift card balances. Therefore, banks tend to be neutral on the issue, unless they happen to be in a compromised financial position. On the other hand, liquidators can cite several reasons why it is advantageous to honor gift cards.

Liquidators usually accept gift cards for the first 30 days of the sale with the estate reimbursing them on a dollar-for-dollar basis. On occasion, the estate may prefer a scenario in which the liquidator accepts gift cards but funds the liability by folding it into reduced bids on the assets. In other words, gift cards become an expense of the sale. Since retailers can track the aging of the outstanding gifts cards, but rarely provide redemption rates for their gift card programs, liquidators are challenged to formulate the best possible bid.

Historically, liquidations generally have shown that:

Why bother dealing with cards in the first place? Liquidation firms cite both “sticks” and “carrots” as reasons for doing so. As an example of “stick” reasoning, the history of gift cards in the U.S. retail sector is checkered at best, and millions of consumers can still remember a time when they felt cheated by activation charges, monthly service fees, or expiration dates hidden in the fine print of certain gift cards. In fact, negative headlines about such practices contributed to the passage of the Credit Card Accountability, Responsibility and Disclosure Act of 2009. This legislative crackdown included consumer-friendly provisions such as a five-year minimum expiration date for most gift cards.

Because of this less-than-stellar history, both consumers and the media are spring-loaded to react strongly to any gift card-related practices that might seem predatory or unfair. This means that if a liquidator refused to accept gift cards during a sale, it would almost assuredly trigger local or even national headlines. Though the liquidator could very well be operating within the confines of the law, perception here trumps reality.

Consider the advertising dollars spent to promote GOBs. Imagine the harm that would be caused by a TV news story featuring a teary-eyed, disappointed child who was not allowed to redeem his $20 gift card at a toy store. Liquidators are very aware that such unwelcome attention will not go unnoticed by the likes of state regulators and attorneys general. In the worst-case scenario, an attorney general could respond to perceived public pressure and opt to scrutinize every aspect of the GOB, in search of anything that could be deemed detrimental to the consumer. This would slow the recovery process for the estate and create headaches for all involved.

When it comes to the “carrot” side of the equation, liquidators see value in the traffic-driving potential of gift cards, many of which have been stuffed into wallets or shoved into junk-drawers for months or even years. Beyond that, millions of Americans are also walking around with cards given to them by retailers in lieu of cash during the processing of merchandise returns. Liquidators understand that a GOB event represents the last chance for shoppers to spend their cards. The fact that they are holding something of real cash value, with a clearly defined shelf-life, acts as a powerful incentive to get people off their couches and into stores. In a sense, gift cards are a form of free advertising for the GOB.

In addition, the 30-day deadline, or simply the fear that “all of the good stuff will be gone sooner rather than later,” can serve to motivate cardholders into action. Consumer behavior has shown that when it’s their last opportunity to redeem a card, shoppers will strive to spend all of it rather than leave a balance. In most instances, this will result in the consumer spending cash over and above the actual balance on the card. Bigger spenders will sometimes even fork over a multiple of the balance of that card.

In some cases, a retailer’s rewards and/or loyalty program can also serve as a carrot for the sale. Last year, when Tiger and its joint venture partners orchestrated a national liquidation event, the retailer’s rewards program was honored throughout the sale. Under the program’s guidelines, rewards members earned one point for every dollar they spent. Once the balance reached 100 points, consumers received a coupon worth two percent of the total balance. With hundreds of millions of dollars worth of inventory in the offing, the joint venture wanted to keep the retailer’s loyalty-program customers coming into these stores for as long as possible, as often as possible. Sending an e-mail to them that stated, “Sorry, but your rewards member status is now null and void” would have been ill advised — both in terms of public relations and in attracting foot traffic to the sale.

Instead, rewards earned under the program were applied to purchases from the first day of the sale until the doors closed for good. E-mail blasts were sent to more than 400,000 rewards customers on at least a weekly basis. While discount changes and merchandise call-outs took center stage in the ads, the fact that the sale continued to honor the rewards program was prominently featured in all promotional materials.

Although incentives from rewards programs are still not honored in all GOB sales today, gift cards are another story. The bottom line: flatly refusing to redeem gift cards is largely a thing of the past. This is a good development — for both the consumer and, in a liquidation scenario, for the estate. While it is prudent for ABL lenders to ensure that gift card liabilities are properly reserved for, a strategic approach to the process also involves considering the potential impact gift card redemptions have on the sale itself, from bidding structures, to pre-sale consumer perception and eventually to sale term advertising campaigns as the process unfolds.

This article originally appeared in The ABF Journal, June 2015