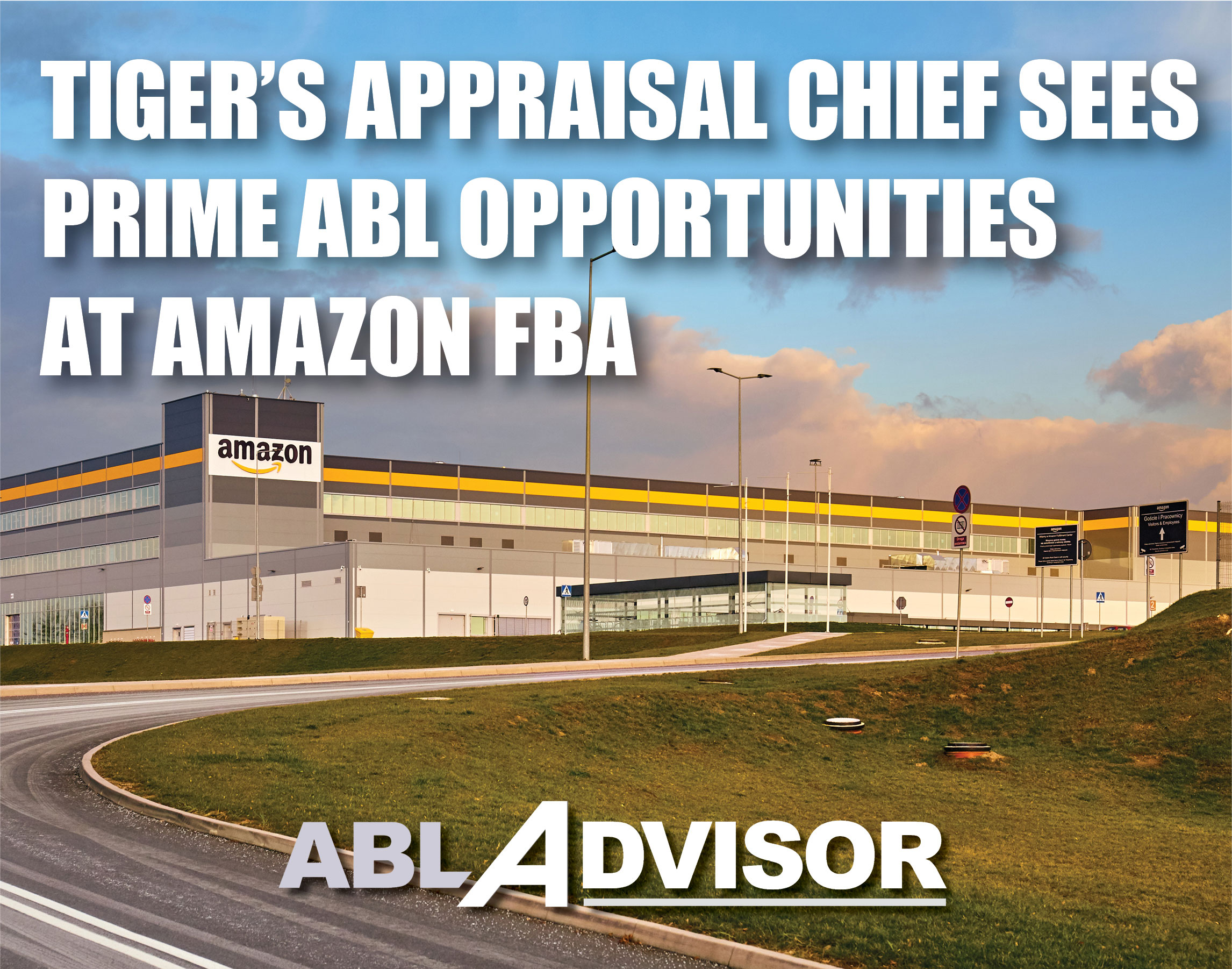 Wholesale and retail inventories have always been a mainstay for lenders, but with millions of businesses now selling their wares on Amazon, what are the potential implications for the ABL sector?

ABL Advisor sat down with Ryan Davis, Managing Director of Tiger Valuation Services, to discuss some of the considerations involved in lending to Amazon sellers. “Inventory quality at FBA [Fulfillment by Amazon] is excellent, so there are phenomenal opportunities for the ABL sector here,” Davis said. “However, assessing borrower health and Net Orderly Liquidation Value (NOLV) in this space requires stepped-up capabilities in data analytics. There are also a lot of misconceptions out there that need to be dispelled.”

Ryan Davis: Amazon has something like 300 million users. It is so huge and diverse, and it offers businesses a tremendous opportunity to sell directly to consumers.

I believe that a lot of the fears in our industry stem from the Marketplace model, wherein the seller has control over its own fulfillment. It is absolutely true that these sellers face a substantial risk of being shut down by Amazon in a liquidation, because they’re more likely to run afoul of Amazon’s exacting standards for timely order fulfillment and returns. We’d recommend approaching such deals with caution.

But where Tiger sees massive opportunity for ABL is the FBA model. With FBA, the sellers physically send inventory to Amazon’s warehouses and, by doing so, basically eradicate operations risks. That’s because Amazon uses its own infrastructure, expertise and personnel to handle the ordering and fulfillment end of things.

ABL Advisor: Are these two basic distinctions well-understood in the ABL industry?

Davis: No, not yet. In fact, a lot of the misconceptions that are out there about the risk of Amazon are rooted in confusion around these different models. If you’re a lender, the simplest question to ask, in order to figure out if a company is selling through FBA, is just, ‘Who’s handling the fulfillment?’ If it’s not Amazon, it’s likely not FBA. The only caveat here is that a small portion of sellers have such a strong history of fulfilling orders that Amazon will qualify the seller’s warehouse as FBA – but that’s very rare.

The good news is that something like 9.5 million sellers—the majority on Amazon—are part of FBA, so this is not a small slice. And we’ve seen investors in recent years pour billions of dollars into FBA businesses, so there’s a lot of growth.

ABL Advisor: Is the pandemic part of what’s fueling this growth?

Davis: Trends set off by the pandemic certainly play a contributing role. For example, when ecommerce accelerated during the pandemic, UPS and FedEx started raising prices and also began leaving smaller ecommerce sellers in the lurch in favor of fulfilling orders for more important customers. Shortages of warehouse workers and other challenges associated with the supply chain have also come to the fore during the pandemic. Letting Amazon handle pack-ship and returns in this environment adds certainty to the seller’s fulfillment and also keeps shipping prices under control, since the seller no longer faces the risk of being singled out by UPS or FedEx for price hikes.

On the other hand, Amazon FBA was already growing. Both sellers and investors have long appreciated that Amazon is the world’s top e-commerce channel. I believe Amazon now accounts for something like half of all U.S. e-commerce sales.

ABL Advisor: And what are some of the misconceptions?

Davis: The biggest one is that Amazon will suspend or cancel your account if you discount too much. It’s a persistent concern, but it is very well-documented that Amazon does not interfere in pricing. Lenders have also asked whether manufacturers can prevent FBA sellers from selling below MSRP/MAP. The answer is “no”—the biggest threat a vendor can hold over a reseller is to prevent the reseller from buying more, but they can’t take any punitive action for selling below a certain price.

A key component of the Amazon listing system is that all items have a standard description. So if multiple sellers are offering the same SKU, a buyer will see the exact same listing for both sellers and the only distinction between the two is price. In other words, sellers actually can’t alter an Amazon listing in the same way that they could alter their own website or an eBay listing. Price is the only thing the seller controls.

This is important because another misconception is that if you use the term “liquidation” in your listing you’ll get shut down. While it’s true you can’t add the term “liquidation” to an Amazon listing, that’s only because you can’t actually change the listing description at all, not because Amazon has any rules against liquidations. In other words, a “liquidation” through Amazon simply means lowering prices and not replenishing inventory. This is a perfectly acceptable option in FBA. We saw the efficacy of this when Tiger liquidated $20 million of Shoes.com inventory, primarily through Amazon FBA.

ABL Advisor: Is there any ability to prevent returns in Amazon liquidations?

Davis: It is true that Amazon requires FBA sellers to accept returns, but most returned goods go right back into inventory, and Amazon return rates are relatively low (less than 10 percent) even for shoes and apparel. With data, the quantity and impact of returns is highly predictable—something that can be factored into the valuation.

A related misconception is that seller accounts will be shut down if inventories fall below a certain threshold. In fact, FBA sellers are free to remove goods from the program. Amazon functions like a 3PL (Third-party logistics provider). If an item is in Amazon’s FBA warehouses and the seller wants it out, just tell them where to ship it and they’ll do that, for a fee, of course.

ABL Advisor: Could you talk about the differences between Amazon and conventional liquidations?

Davis: For traditional retail liquidations, it takes an experienced merchant to know how consumers will respond to discounts and sale language. An Amazon FBA liquidation is more about objective data and pure price than subjective merchandising and marketing creativity. What you need to make good predictions is lots and lots of data as well as a great analytics engine and the right analysts.

So, far and away the biggest challenge in appraising FBA inventories is the need to embrace a data-driven approach. Moreover, the Amazon world changes much faster than brick-and-mortar retail. At Tiger, we’re comfortable appraising and loaning against FBA inventory in part because we have been building our predictive analytics model for years. In addition, since we appraise so many FBA operators, we can keep our finger on the pulse of both the latest Amazon policies and also the data trends, which keeps us ahead of the curve.

Davis: So far FBA liquidations have been extremely uncommon, but for a very good reason—these businesses are hugely scalable, both up and down. FBA is an almost exclusively variable-cost business model, whereas wholesale and retail businesses have fairly big fixed expenses with their rent and payroll. For these more traditional business models, when sales fall below a certain level, the businesses often can’t make adjustments fast enough to cover those fixed costs, which is of course what leads to financial distress.

However, FBA sellers generally have relatively low corporate overhead, but in every product sale there are fairly large variable expenses of Amazon’s commission, FBA picking fees, and shipping. With a retailer, a low-margin product sale can still result in a positive contribution to overhead, but with FBA a low product margin sale can result in a negative net margin after all of the variable costs. With such a model, that means that for FBA sellers, gross margin percentage is actually more important than volume. For example, we have seen Amazon FBA clients cut their overall sales by more than 50 percent by cutting lower-margin items from their inventory, and the result was that they were actually more profitable with lower sales.

So between the resilience of the FBA business model to absorb changes and the amount of sheer data and analytics capabilities our appraisal team has, Tiger is very bullish on Amazon FBA businesses for ABL. Just like yesterday’s brick-and-mortar retailers, FBA sellers are hungry for the capital they need to grow. We’re confident in these opportunities and, in partnership with banks, are ready to deploy capital as a lender to FBA sellers.

This article appears in ABL Advisor.