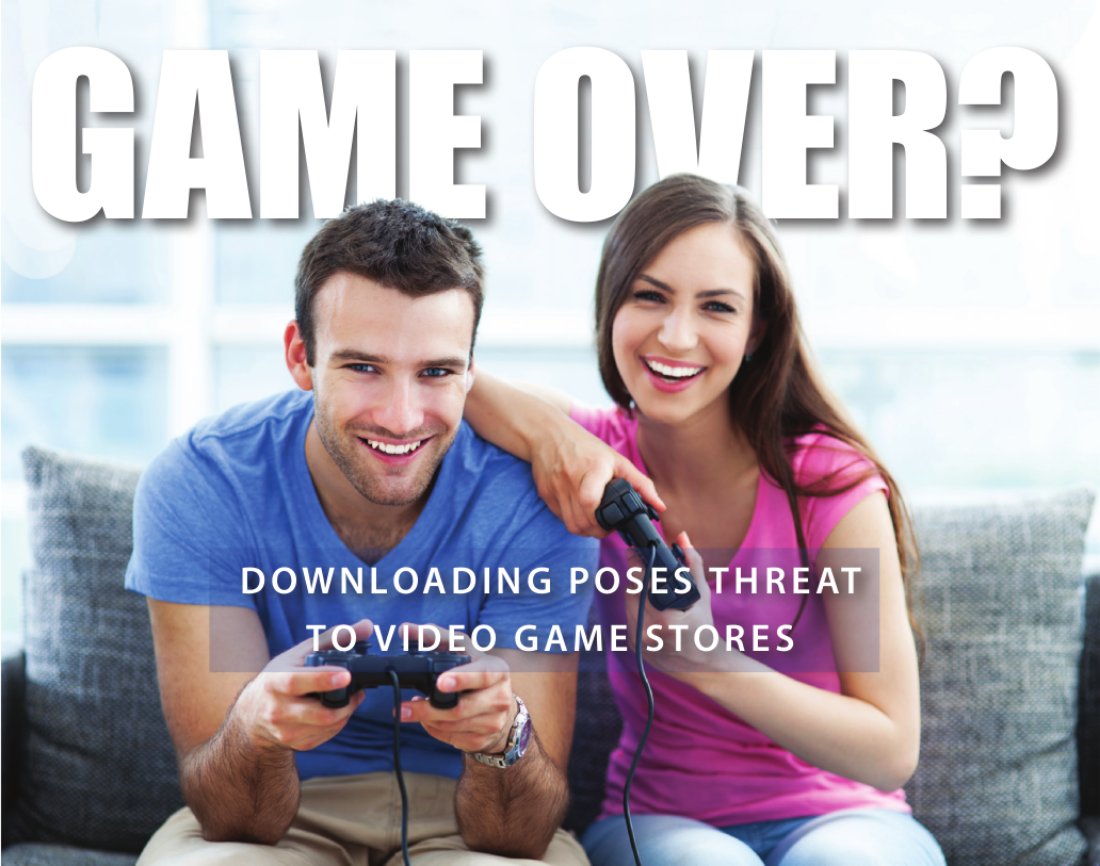 Explosions and firefights are part and parcel of today’s videogames, but a different sort of “creative destruction” is at play within the industry itself. After decades in which video games were available mostly on physical media like discs and cartridges, the arrival of trends such as mobile gaming, digital downloading and cloud computing promises to change the way people buy and play video games in fundamental ways. While physical media-based consoles such as the Nintendo Wii and Xbox 360 are still in widespread use — and the next generation of such consoles is slated to hit the market as early as this spring—the video game business is rapidly moving toward a world in which users like my 14-year-old son and his friends download and stream content on the fly rather than head out to malls to buy games sealed in shrink-wrapped plastic. Given enough time, this movement toward a download-centric model will likely reduce the value of video game cartridges, consoles and similar collateral, and it will also hamper the prospects of those businesses that specialize in selling and distributing physical media of this type.

Retail observers already cite a parallel trend — the downloading of digital books and movies — to help explain the demise of brick-and-mortar chains such as Blockbuster and Borders. While it would certainly be premature to declare “game over” for video game retailers, it is nonetheless true that recent trends for these stores have not been encouraging. For example, GameStop, the industry’s largest brick–and-mortar chain, saw its comp-store sales fall 8.3 percent during the third quarter of fiscal 2012 (ended October 27), followed by a slighter 4.4 percent decline during the nine-week holiday period ended December 29. With the holiday sales report in hand, management projected that full-year fiscal 2012 comps for the 6,650-unit chain — which has broadened its offering to include smartphones and pre-paid wireless service — should be down in the 7.5 percent to 9.0 percent range.

Meanwhile, sales in the video game industry at large have been in a slump for well over a year. In January, NPD Group reported that physical video game sales for 2012 tumbled 23 percent from 2011 levels to $6.71 billion, while hardware sales dropped 27 percent to $4.04 billion.

Given that so many casual gamers are sidestepping consoles to play online games on their phones, and that so many hardcore gamers are now downloading major titles to their PCs and Macs, these challenges for the brick-and-mortar side of the business come as little surprise. Indeed, the switch to digital content delivery and the rising popularity of smartphones and tablets are likely to have a big impact on distributors and retailers of physical products.

First, as content delivery migrates to a digital-distribution model, more distributors and retailers will find themselves in over-inventoried positions. The impact will be strongest for those companies that have a heavy focus on new releases, as these are the most likely to be adopted in the digital delivery model. In fact, several publishers and developers, such as Activision and Electronic Arts, have already begun allowing online purchases to be downloaded—a worrisome sign for retailers.

Second, the aforementioned tablets and smartphones will continue to cannibalize sales from consoles like Nintendo 3DS and PlayStation Portable. According to Pew Research, 45 percent of American adults owned a smartphone as of December 2012, and 31 percent owned a tablet computer as of January 2013. These translate into huge and growing markets for games like “Angry Birds.” While it is too early to fully determine the long-term effects of mobile gaming on the traditional video game sector, one distinct possibility is that more and more gamers will abandon expensive, console-based games in favor of the cheap thrills of mobile apps. Likewise, social network gaming — i.e., playing video games online via Facebook — requires no purchase of a shrink-wrapped disc or cartridge.

Given these trends, it is likely that value-priced games and devices will eventually begin to dominate the market for physical products as average selling prices drop and stores shelves fill with older, legacy titles, as opposed to new games. Distributors with established channels for value titles will likely win out during this transition phase.

In addition to the above, secured lenders should also consider tracking related trends, including the race for market dominance in the highly cyclical game-console business, and the impact of spiraling development costs on the viability of companies that produce video game content.

Generally speaking, lifecycles for high-tech console hardware have typically been about five years. For example, Sony’s PlayStation 3 was released in 2006 as a follow-up to the PlayStation 2, which was launched in 2000. Likewise, Microsoft originally launched Xbox in 2001 and followed-up with the Xbox 360 in 2005. According to various industry sources, new versions of both are expected to hit the market as early as March 2013. Of course, these newer systems and games will have higher recovery values than their immediate predecessors, which will continue to lose consumer appeal as they become more and more obsolete relative to the next-generation games. But it will be interesting to see whether this reboot of the console cycle translates into a powerful lift for sales of physical video games or falls flat relative to what has happened in the past.

Platform dominance is another factor to watch. The PlayStation 2 was a premier platform that lifted console sales to greater heights when it was released 13 years ago. However, Microsoft’s Xbox 360 has surged to gain market share and has usurped Sony in recent years. Unlike its competitors, Xbox 360 managed to gain momentum and boost sales volume thanks to the creation of the Xbox Kinect. This motion-sensor technology allows players to control games with their bodies rather than handheld controllers. According to NPD, Xbox 360 has been the top-selling home console for 25 months in a row, moving 281,000 units in January alone.

In coming months, secured lenders would do well to pay attention to the consumer reception for the next generation of consoles. Assuming they are indeed released this spring, the new machines — provisionally dubbed the “Xbox 720” and the “PlayStation 4” by industry bloggers—will go toe-to-toe for market share in a battle for dominance that could affect recovery values for certain inventories. For example, it is possible that frustrating glitches could scuttle sales of one of these systems even as its competitor scores a big hit with gamers. Also worth tracking is the degree to which the manufacturers of these next-generation systems emphasize downloadable games and streaming content. Consider this headline from one video game blog from Feb. 6: “Xbox 720 to require Internet connection? Sources say new machine will require constant broadband connection, block secondhand titles, and ship with a new iteration of Kinect.” If console manufacturers do choose to aggressively push their products in a new direction—namely, one in which consumers are encouraged to embrace downloading, streaming and group online play (in exchange, of course, for a monthly service fee) — it could be yet-another contributing factor in the decline of physical media.

Lastly, for secured lenders it can also be helpful to understand the seasonal and increasingly hit-driven nature of video game sales. Comparisons to Hollywood movies are more than justified.

The primary sales period for games occurs in the fourth quarter holiday selling season, when the majority of new releases are launched and, therefore, collateral value is higher. There is also a secondary launch period leading up to summer. In addition, the mix of titles in a given inventory is of similar importance: Games experience a rapid price decline from launch to end of life, and the stage each title is in can have a significant impact on the price it can fetch in any channel. Likewise, the platform for which the title is designed can have a significant impact: Consoles with higher market share are likely to generate greater game sales.

For video game publishers, costs incurred are largely front-end expenses such as R&D that are anticipated, at least, to be offset by sales volume. These costs are not typically included within the cost of goods, which results in a lower cost basis than the true total cost. The cost reported on company financial statements generally only reflects the material cost (compact disc, case, inserts, etc.) and the royalty obligation provided to the console manufacturers. These obligations have been trending lower in recent years, and the actual cost of materials has declined substantially as well. However, gamers have been demanding greater sophistication in the games themselves, requiring levels of investment that are approaching those of Hollywood feature films. This can create significant working capital issues if a large investment ends in a flop. In January, for example, the Agoura Hills, Calif.-based video game publisher THQ sold most of its assets at a bankruptcy auction in which its competitors acquired approximately $72 million of games in development, as well as production studios, according to The Los Angeles Times. Just five years prior, the company had enjoyed a market value of more than $2 billion, but it had been unable to survive the recent production of several costly flops.

Without doubt, the video game industry is undergoing some of the most significant shifts in its history. While none of this appears to put secured lenders’ collateral in immediate jeopardy, close monitoring of these trends, along with key metrics and regular reviews of collateral valuation, clearly is warranted.

This article originally appeared in The ABF Journal, April 2013