US liquidators give retailers ‘sticker shock’ over unsold goods 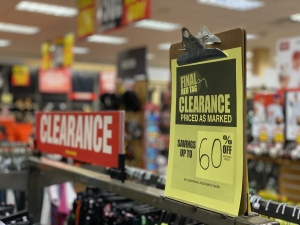 America’s largest liquidation firms say retailers have been inundating them with calls to offload goods following weeks of lockdown, only to balk at the ultra-low prices they are offering to take inventory off their hands. Coronavirus upended retailers’ inventory planning, leaving goods stuck throughout supply chains from distribution centres to store shelves and forcing companies to dispose of them at a discount. Several retailers have written down the value of their stock in the pandemic, with Macy’s taking a $300m charge, Gap a $235m hit and Urban Outfitters $43m. As well as running store sales, some retailers are also donating merchandise to charity, packing it away in warehouses to be sold later, and sounding out liquidators who will buy it for a fraction of what they paid for it. Companies that acknowledge they use liquidators include J Jill, the women’s clothing chain.

“I’m getting phone call after phone call from retailers asking what the best solution is,” said Michael McGrail, chief operating officer of Tiger Group, one of the big four liquidators. Liquidators are best known for disposing of the assets of bankrupt businesses and also run everything-must-go-sales for stores that are shutting.

Tiger, Hilco, Great America and Gordon Brothers are running closure sales for about 150 JCPenney stores. It’s a big sticker shock, going from full price inventory that you expected to make margin on, to now having to sell it for some fraction of cost Ian Fredericks, Hilco Merchant Resources “This is one of the busiest periods we’ve ever seen,” said Ian Fredericks, executive vice-president of Hilco Merchant Resources. The firms also have a lesser known role flogging inventory that retailers have been unable to sell. Liquidators buy excess stock and use it to supplement the out-of-business-sales, where the product line-up would otherwise be lacking. “Some of our best clients are healthy retailers,” Mr Fredericks said.

However, liquidators have challenges of their own during the pandemic. As with regular retailers, they face the risk that lockdowns are reimposed. “It’s just as much risk for us as it is for anybody else,” Mr McGrail said. “If they close, my merchandise and capital is locked up in a store for who knows how long.”

Liquidators are prepared to buy the merchandise for just cents on the dollar. “Nobody wants to get 10 cents on the cost dollar,” Mr McGrail added. “When I tell them [retailers] the price that they’re probably going to get, they go back to the drawing board. They say, ‘that’s terrible’.”

At the same time, an unexpected rebound in US consumer spending has allowed retailers to sell more stock themselves through regular store sales and avoid liquidating it. “You would think that liquidators would be buried in goods [after the lockdown], but they’re not,” said Jan Rogers Kniffen, a retail consultant and former department store executive. “There’s not as many goods out there as we thought there might be. Retailers cancelled product [orders], and there’s been zero replenishment. Stores are actually not overrunning with inventory.”

Seasonal clothing is the biggest headache for retailers. The height of the coronavirus shutdown was in spring, when flip flops, bathing suits and other summer items usually sell. The industry “missed the spring season entirely” and also lost the opportunity to sell discounted winterwear, Mr McGrail said.

Recommended Coronavirus economic impact US retail rebound falters as virus infections surge Liquidators said they have had to turn away some retailers who wanted to offload items en masse. Some had approached Hilco to ask if they could take every item away from their stores, Mr Fredericks said. “In some instances we’re talking about thousands of stores, with tonnes of inventory in them. Where would you actually sell it? There’s no place that can necessarily absorb that much inventory that quickly.”

He added that in normal times, retailers turned to liquidators to shed unsold stock that had already been marked down in stores several times. In the pandemic, they sought to liquidate items that had been fully priced. “It’s a big sticker shock, going from full price inventory that you expected to make margin on, to now having to sell it for some fraction of cost. Usually it’s been through multiple mark downs before it gets to that point.”

Some retailers have also been donating to charity. Banana Republic said last month it was giving more than $20m worth of unused clothing to the unemployed and others in need. Ralph Lauren has also donated about 1.5m items of clothing.