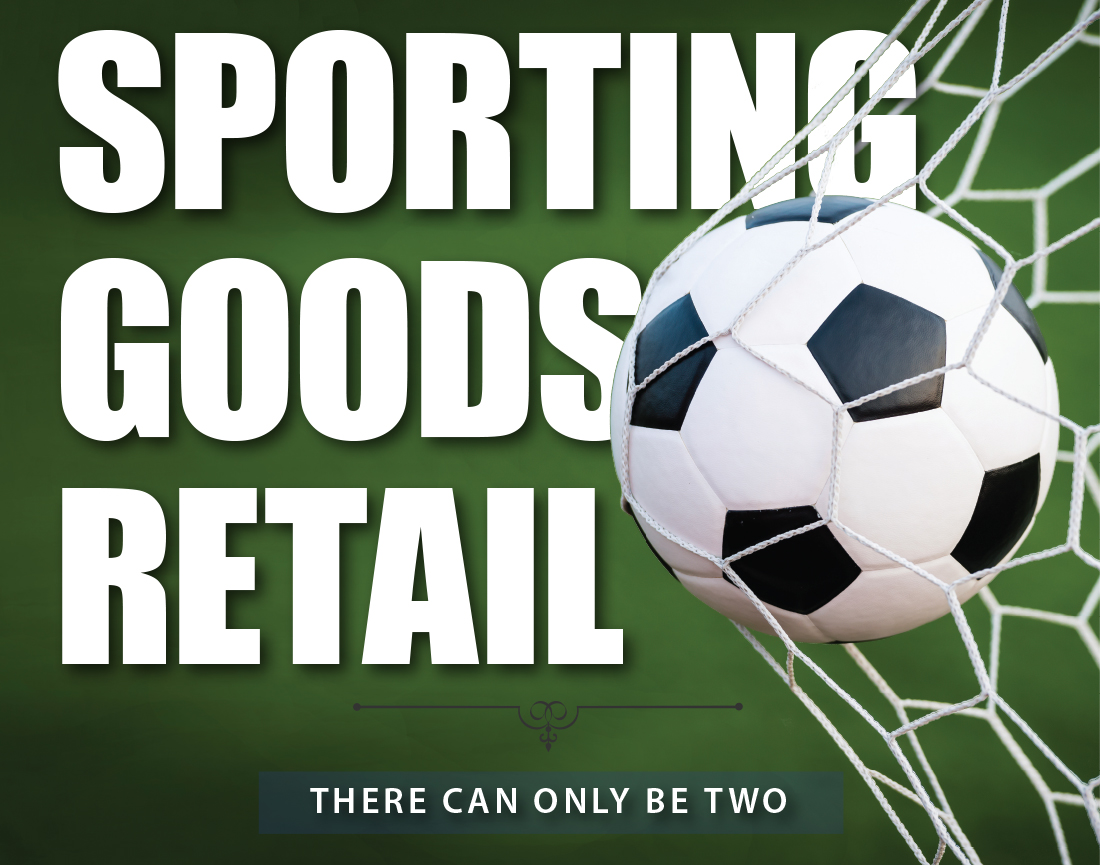 At first glance, it might seem that national sporting goods chains should have the wind at their backs: U.S. personal income is expected to rise or hold through 2017, and researchers at Morgan Stanley cite dramatic growth in sports participation in North America, particularly among young people. According to IBIS World, in fact, the compound annual growth rate of the retail sporting goods market will be 3.4 percent from 2015 to 2020, driven largely by rising incomes.

If the category is growing, then why are we seeing such consolidation among brick-and-mortar chains? Sports Authority and Sports Chalet have gone out of business, leading to the closure of close to 500 stores. Back in December, meanwhile, Cabela’s engaged a financial advisor amid increasing pressure from activist hedge fund Elliott Management Corp. BassPro/Goldman Sachs are reportedly interested in buying the chain.

Simply put, the days have long since passed when most Americans bought all their sporting goods from a local big-box chain. Credit Suisse describes the category as overstored, with 13,400 sports-related chain stores as of 2015 (up 11 percent from 2011). Adding to this oversupply, sporting goods retailers are also facing tough competition from a host of specialty stores and nontraditional competitors offering sports-related merchandise.

Staple brands such as Nike and Under Armour, for example, have been ramping up their direct sales through a variety of channels. The availability of so-called athleisure apparel has expanded from expensive Lululemon to the likes of Forever 21, Gap, Walmart and Target, where more affordable workout clothes are now more prominently displayed. Parents and athletes can also find discounted sports equipment at various retailers, including Big 5 Sporting Goods and Modell’s.

But of course, the biggest factor here is the Internet: According to Statista, “the second-most popular way of buying sporting goods in the United States is through online shops and mail-orders, with sales on these platforms amounting to almost $10 billion in 2014.”

‘There Can Only Be Two’
Retail consolidation has been a fact of life for a decade or so, thanks to the tremendous amount of overbuilding that occurred in U.S. retail during a far-simpler era. (Consider that The Home Depot built 900 stores from 2000 to 2005, an expansion rate that would be unthinkable today for such a large-format concept.) In the early years of the consolidation process, as Linens ‘n Things, Circuit City, Borders Books & Music and several other larger-format specialty chains fell by the wayside, one of my mentors predicted that there would eventually be room for just two leaders in each category. Increasingly, it seems that his prediction was on target — so long as you count the Internet as one of the two. Instead of Linens ‘n Things and Bed Bath & Beyond, in other words, it’s Bed Bath & Beyond and the Internet, with smaller players here and there to pick up the balance. It’s a pattern that has been replicated across several retail categories — sporting goods included.

Here, Dick’s has clearly emerged as the other leader along with the web. Dick’s not only has more stores than other chains — 600 as compared to Sports Authority’s former 450 and Academy Sports’ 190 — but Dick’s locations have benefitted greatly from significantly more capital investment than those of debt-ridden Sports Authority or Sports Chalet (47 stores). As a result of this investment, the customer experience at Dick’s is superior to that of its rivals. Dick’s has even started hiring certified fitness trainers to provide a higher level of customer service in its stores. Today, the shopping experience is important across all of retail, but it is especially important whenever the product is essentially the same across a variety of channels, as is true of sporting goods. If you lived in a town with an understaffed, barebones sports store and a shiny new Dick’s Sporting Goods brimming with equipment, staff, interactive displays, etc., where would you go, given the general sameness of the merchandise?

Brick-and-mortar chains, moreover, also need to spend a lot of money to stay competitive in the online marketplace. By all accounts, Dick’s is doing a great job on this front. According to Internet Retailer, Dick’s aims to hit ecommerce revenues of $1.2 billion next year. “E-commerce accounted for 9.2% of overall sales in 2014 and 10.3% in 2015,” the magazine reported. Dick’s also is moving to bring its ecommerce business, which has thus far been handled by eBay, entirely in house.

As noted in an analyst report by Susquehanna, Dick’s is now raking in the spoils of its victory in the category: The chain snapped up 30 Sports Authority locations, including five key stores in Florida and nine in California, along with Intellectual Property and customer data.

In the case of Sports Authority, the appraised value given to the asset-based lenders held its value. As demonstrated by this sale, the changing landscape of retail does not necessarily affect liquidation values, which can continue to hold against timely appraisals.

From the ABL perspective, then, sporting goods collateral inventories continue to have plenty of value. Increasingly, though, store productivity will hinge on location and convenience for the end-user, along with, as mentioned above, the strength of the customer experience. In saturated markets with a lot of competition, it is important to know which chain ranks as the leader, because financial issues will continue to emerge among the also-rans.

Note that we are speaking here of larger-format sporting goods chains: Specialty shops focused on cycling, skiing, tennis, etc., can and do thrive by maintaining superior customer service and strong offerings of niche merchandise. In my neighborhood, a small hardware store has continued to do well despite The Home Depot moving in next door. Walk into this place and the knowledgeable and personable staff will immediately offer to help you. Americans still value this level of service — especially when it comes to recreational activities they strongly identify with as part of their lifestyles and “who they are.”

But for the remaining mass-market sporting goods chains with a national or regional focus, count on continued pressure from Dick’s and the other winner on the proverbial podium—the Internet.