Ryan Davis, Managing Director of Valuation Services at Tiger Group, has been named a ‘40 Under 40’ recipient in the 2020 awards program from The Secured Finance Network (SFNet), the professional association of the secured lending industry. 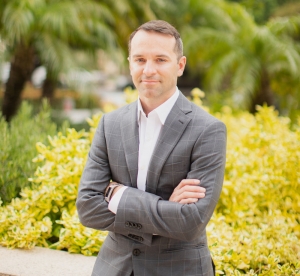 “The SFNet 40 Under 40 Awards, established in 2016, celebrate the achievements of young professionals in the secured finance industry — movers and shakers who exemplify true excellence in their careers and who also contribute to their communities and the industry as a whole,” the organization noted in a statement. “SFNet’s 40 Under 40 recipients are the future of the secured finance community.”

Davis, who is based in the asset appraisal, disposition and investment firm’s Boston office and resides in South Boston, was one of two honorees in the competition’s Liquidation/Appraisal/Auctioneer category. An SFNet official noted that the organization “had an overwhelming number of nominations” for the 2020 program, which honored individuals in seven categories.

“We are thrilled to see Ryan get this well-deserved recognition for his ground-breaking work in our industry,” said Tiger Group COO Michael McGrail. “This is a significant honor and we could not be prouder of this valued member of our executive team.”

In nominating Davis for the program, McGrail said: “Ryan is an ideal candidate—a creative leader with the ability to drive innovation industrywide. The 38-year-old is already changing the way borrowers and lenders think about valuations, and each other. When Ryan took over our appraisal division in 2013, he stepped forward with a vision for how to improve the methodologies in our industry through more detailed analytics. Many appraisers were still relying on habits formed when borrower data was less granular; in Ryan’s view, the resulting blind spots from making high-level assumptions could lead to inaccurate assumptions by the appraiser, and thus elevated risks for lenders.”

Under Tiger’s Analytics Initiative spearheaded by Davis, inventory lifecycles at the SKU level undergo far-more-detailed analysis. “By drilling into borrowers’ business information systems and other troves of data, Ryan’s team now provides borrowers significantly more insight into their data,” McGrail noted. “The analytics give borrowers tools to better manage inventory and, in turn, give lenders more comfort with their collateral.

“His holistic approach can also reveal the long-term viability of bankrupt entities,” McGrail continued. “When competing bidders wanted to totally liquidate Advanced Sports Enterprises, Ryan saw a going concern in the bicycle company’s wholesale operation. He was instrumental in forming a JV to acquire the assets and turn the business around.” After being appointed interim CEO of newly formed BikeCo in February 2019, Davis directed his team’s efforts to streamline operations, preserve the dealer network, save 40-plus jobs and set a strategic vision. Tiger sold its stake in BikeCo late last year.

The University of Vermont graduate joined Tiger from a competing firm in 2006. As an analyst and appraiser, Davis participated in thousands of appraisals and dozens of retail and wholesale liquidations. Since taking the helm of Tiger’s appraisal division, he tripled the size of his team, while attaining more than 10 percent annual growth in valuations.

“Ryan’s success owes in part to his willingness to challenge prevailing assumptions,” McGrail added. “Bucking the trend in our industry, he urged Tiger to use Amazon as a liquidation channel; the successful liquidation of Shoes.com is one example. Within the broader SFNet community, Ryan continues to  advise the likes of Bank of America, JP Morgan, Wells Fargo, and PNC on the benefits of lending to borrowers with Amazon inventory.”