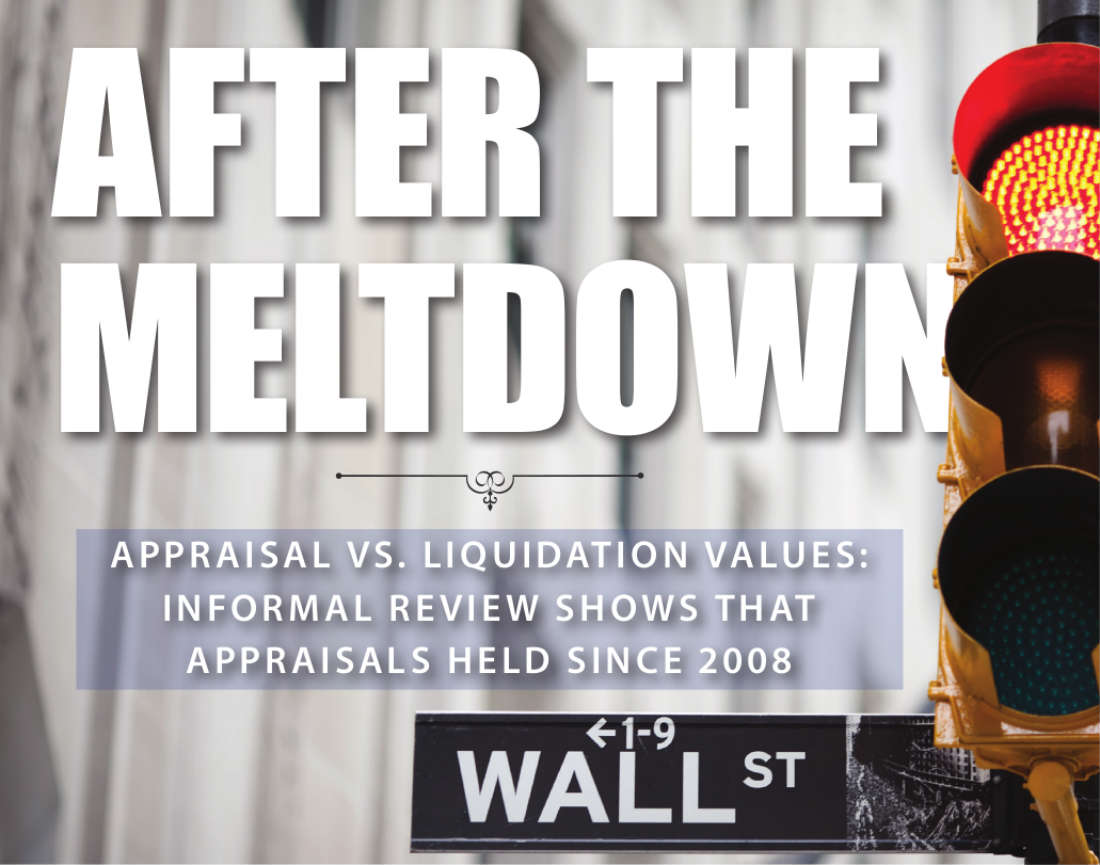 In the topsy-turvy period that followed the financial meltdown of 2008, the U.S. economy weathered the liquidation of thousands of companies, including big-name retailers such as Circuit City, Goody’s, Mervyn’s, Gottschalks, and Ritz Camera, to name a few. But the change in market conditions meant that a large number of companies needed updated appraisals right away. The resulting backlog forced the secured lending community to contemplate whether the appraisals that did exist were worth the paper they were written on.

But as the actual results of all of those liquidation sales started to pour in, confidence in the validity of appraisals began to return. Consumers, as it turned out, were showing up for these sales and spending money.And so, despite all of the initial fear in the marketplace, the ABL community could at least be confident about one of the cornerstones of the lending process — the appraisal.

In fact, when you conduct an analysis of the major deals that occurred since 2008, looking carefully at both the original appraisals and the actual bids that eventually came in, what you find is that the appraisals held. Only in rare instances did bid values drop below the appraisal. And here, the differential tended to be relatively small. These rare cases also occurred only during 2008 and 2009, a relatively brief period in which the lenders were on high alert and disposition firms were leery about aggressively bidding deals, thanks in part to all the frightening talk of a consumer credit meltdown. Moreover, the accuracy of the appraisal process has been just as evident in more recent years with the likes of Orchard Supply, Bakers Shoes and Borders Books & Music.

Several factors — from shifting consumer spending patterns, to ramped-up competition for deals, to the realistic approach of today’s appraisal process itself — have contributed to this trend. Consumer spending, for example, accounts for more than 70 percent of U.S. Gross Domestic Product (GDP). So when the spending patterns of Americans shift, even if only slightly, the ripple effects tend to be far-reaching. But U.S. spending patterns did not just change slightly as a result of the financial crisis and Great Recession; they shifted dramatically, with nearly everyone trading down in search of value. Even today, outlet malls, dollar chains and warehouse clubs continue to be among the fastest-growing retail concepts. Arguably, this shift in U.S. spending patterns benefitted creditors by driving more shoppers to retail GOB sales. Liquidations, after all, share something in common with the likes of outlet malls and dollar stores: a strong perception of value.

When shoppers believe they are getting a great deal, they are simply more likely to open their wallets. This perception of value is a key part of the psychology of why people buy at store-closing events. Understanding this, many retailers actually began to borrow some of the tried-and-true marketing techniques employed by liquidation firms conducting GOBs. Even today, retailers continue to put sign walkers out on the sidewalk, or to cover their windows with oversized posters declaring discounts of up to 60 percent off. In 2009 and 2010, some retail observers fretted that the industry was “training” consumers to never consider shopping full-price again. Regardless, nothing draws customers to a sale with the same magnetic force as the words “going-out-of-business.”

From a psychological perspective, picking up something at a GOB sale for half off of its original retail price is a far cry from a consumer coming home from a full-price boutique and saying, “I just blew the budget and spent money on something I should not have, and I have no excuse for it.” But the shift in consumer spending patterns is just part of the reason appraisals have held steady over the years. The structure of the deals themselves was another major factor. Even during the darkest days right after the financial meltdown, the structure of the deals tended to pave the way for high recovery percentages to be returned to the estates. Circuit City, liquidated by a group that included Tiger, is one example. Here, when the sharing component was factored in, it created an end result that was higher than the appraisal, even though the bid had come in slightly below it.

At its height, Circuit City Stores Inc. operated more than 700 locations and did $12 billion in sales. But the chain, which was facing increasing competition from the likes of Best Buy, Amazon and Wal-Mart, failed to survive the economic crunch and liquidated its last American retail store in 2009. Given all the questions about the viability of consumer credit, Tiger and its joint venture partners put a guarantee down of 70.5 cents on the dollar, a figure that was slightly below the appraised value. In Circuit City, the structure of the agreement strongly favored the creditors in recognition of the high-risk economic environment. For example, while the first 1% over the 70.5 cents went to the liquidators, any proceeds above this were shared 70% to the estate and 30% to the liquidators. The deal was also structured so that, once the liquidation firms had made an aggregate of 3% above the 70.5 cents, anything over this threshold would result in the creditors receiving 90 cents on the dollar.

Even though the bid was slightly lower than the appraised value, these terms offered the estate a tremendous amount of upside. At a time when fear was in the air (this agreement was dated January 2009) the fear was taken out of this major liquidation event for the major secured creditors. Given the overall timing, the Circuit City scenario at first glance seemed like a worst-case scenario. But in the end, it was a great recovery, with most of the upside returning to the estate.

The fact that appraisals held, even in the thick of one of the worst economic crises in recent memory, argues favorably for the manner in which appraisals are conducted today. This approach never allows certain unknowable factors to affect the appraisal number. For example, it is impossible for appraisers to predict how the sharing component or other elements of the deal structure might affect bids, and there are a host of other factors that could potentially boost liquidation values but that cannot be built into the appraisal. The presence of a financially solid strategic partner is one such example. A competitor might want to split off one of the borrower’s divisions and run it as a going-concern, or snap up a grouping of leases or stores. With keen interest in such turnkey assets, strategic partners often drive up bid values. But this is never guaranteed, and thus will not be reflected in the final number on the printed page. Likewise, augmentation rights typically raise the value, as the addition of fresh merchandise can be a critical factor in guaranteeing that core customers continue patronizing the store through the entirety of the sale. But the presence or absence of inventory augmentation cannot formally be built into the appraisal: There is always the chance, slight though it might be, that the bankruptcy court will not allow augmentation to occur.

Macroeconomic factors have also played a contributing role. The economy may no longer be in free fall, but it is still relatively flat, and so the business press continues to make much about the billions of dollars “sitting on the sidelines” amid relatively few opportunities for investment. Cleary, aggressive competition among asset-based lenders has led to fewer liquidation opportunities. This situation has slowed the deal flow into the liquidation community, thereby creating more aggressive bidding when opportunities arise.

And yet it still makes sense for appraisers to take a midpoint stance vis-à-vis the future state of the market. The U.S. economy is fundamentally cyclical. To assume that aggressive bidding will continue indefinitely is to essentially say to the bank, “We’re pushing this appraisal so that it reflects the best possible outcome we can envisage, but don’t worry.” Of course, this would put the bank in a position of untenable risk.

Today, mergers and acquisitions are on the uptick, with far-fewer bankruptcies than occurred during the post-meltdown period. Restrictions on lending are greatly reduced from a few years ago. Moreover, the purging that occurred after 2008 means that bank portfolios are, for the most part, clean. And as the data make clear, the ABL sector has been enjoying a market in which appraisals have continued to be both safe and accurate, in good times and bad. The end result is that today is an opportunistic time for credit-worthy companies to borrow money — and this is welcome news for the ABL sector, knowing that their collateral is backed by an accurate appraisal product.

This article originally appeared in The ABF Journal, October 2013.